× Bidding has ended on this item.

This very rare space item can be seen at “The San Fernando Museum of Aerospace” located at 7429 Laurel Canyon Boulevard, North Hollywood, CA 91605. Further information can be obtained by calling 818-765-1087. This facility is one of the most historically significant Space related museums in the United States.

The LR87 was an American liquid-propellant rocket engine, which was used on the first stages of Titan intercontinental ballistic missiles and launch vehicles. Composed of twin motors with separate combustion chambers and turbopump machinery, it is considered a single unit. The LR87 first flew in 1959.

The LR87 was developed in the late 1950s by Aerojet. It was the first production rocket engine capable (in its various models) of burning the three most common liquid rocket propellant combinations: liquid oxygen/RP-1, nitrogen tetroxide/Aerozine 50 (a 50/50 mixture by mass of hydrazine and UDMH), and liquid oxygen/liquid hydrogen. The engine operated on an open gas-generator cycle and utilized a regenerative cooled nozzle and combustion chamber. Later versions had additional ablative-cooled flanges. The LR87 served as a template for the LR-91, which was used in the second stage of the Titan missile.

It was a fixed-thrust engine, which could not be throttled or restarted in flight. The LR87 delivered approximately 1,900 kilonewtons (430,000 pounds) of thrust. Early LR87 engines used on the Titan I burned RP-1 and liquid oxygen. Because liquid oxygen is cryogenic, it could not be stored in the missile for long periods of time, and had to be loaded before the missile could be launched. For the Titan II, the engine was converted to use Aerozine-50 and nitrogen tetroxide, which are hypergolic and storable at room temperature. This allowed Titan II missiles to be kept fully fueled and ready to launch on short notice.

The Aerojet LR87 was the only engine known in the world that was operated (with modifications) using all three major propellant combinations: kerosene RP-1 and liquid oxygen; storable hydrazine and nitrogen tetroxide; and liquid hydrogen and liquid oxygen. The engine was tested with less success using nitrogen tetroxide and a gelled aluminized version of Aerozine-50. Some studies and development work were done on a fluorine/hydrogen version of the engine.

The Lox/LH2 version was the first large Lox/LH2 engine fired in the world. The entire development took place from 1958-1960, and was of the same magnitude as the parallel modification of the LR-87 engine to burn storable propellants for the Titan 2. The Lox/LH2 engine was essentially an LR-87 regeneratively cooled thrust chamber and nozzle, with a modified injector, and redesigned fuel pump. There were a total of 52 static tests run on full scale flight-weight hardware. Sea level thrust was as high as 59,000 kgf, equivalent to 68,000 kgf in vacuum. Simple impinging stream injectors were used rather than the more expensive conventional coaxial types used later on the M-l and SSME. All start-ups and shutdowns were smooth, and the combustion efficiency (C*) reached 99%. Operation was stable throughout and there were no major leakage problems. Early tests used pressurized propellants, but the later ones used flight-type turbopump assemblies.

In comparison with the Lox/Kerosene LR87, major changes were made on the injectors, and the RP-1 fuel pump was replaced by a single stage hydrogen pump specially designed for the purpose. The oxygen pump and its gearbox were unchanged from the original design.

When the time came for the competition for the 90,000 kgf J-2 engine for the Saturn V, Aerojet seemed well placed. In fact, Aerojet's proposal was ranked first in 10 areas and tied for the eleventh. But NASA selected Rocketdyne instead to develop the J-2 from scratch. A few years later the experience with the hydrogen LR87 did lead to Aerojet winning the ill-fated M-l contract. And twenty years later, when the USAF funded initial development of a lower cost Advanced Launch System, the original LR87 experience came in handy. For unlike the designs funded by NASA in the intervening years, Aerojet had achieved a very low cost hydrogen/oxygen engine at the dawn of the space age.

The Titan missiles used the LR-87 as its first stage engines.

The LR-87 was powered by liquid oxygen (LOX) and RP-1 in the Titan I. In the Titan II, they were powered by Aerozine-50 (a 50-50 blend of unsymmetrical dimethylhydrazine [UDMH] and hydrazine) and nitrogen tetroxide (NO). I've found relatively little documentation for the UDMH/NO version of the engine, or the specific changes which were necessary to convert to the new propellants. 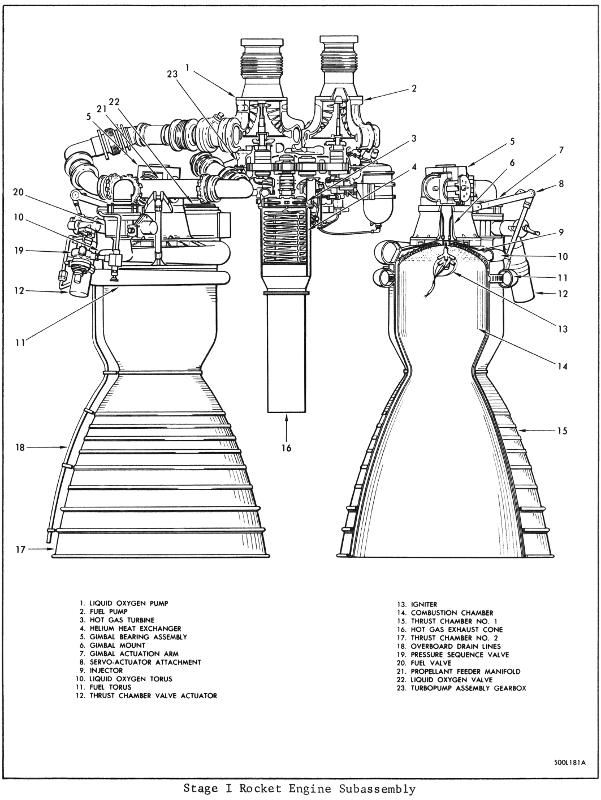 There are no questions for this listing.